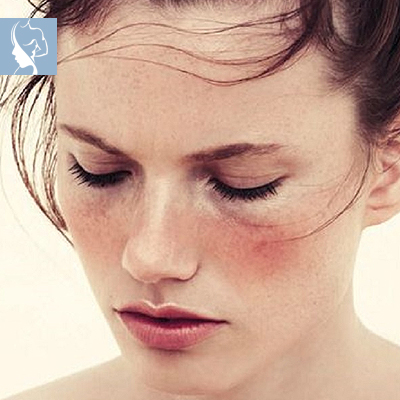 Rosacea is a long-term skin condition that typically affects the face. Rosacea is characterized by redness and inflammation of the facial skin and may be also accompanied by pimples and broken blood vessels. The condition is seen more in females and is common between the ages of 30 and 50.

Rosacea often starts with just a slight flush of the cheeks but may soon progress to other areas of the face, such as the forehead and chin. It can also affect the chest and back.

Factors that may potentially worsen the condition include heat, exercise, sunlight, cold, spicy food, alcohol, menopause, psychological stress, or the use of steroid cream on the face.

There are different subtypes of Rosacea and the distinction between these is based on the presenting appearances on the face.

As Rosacea develops, small dilated blood vessels known as Telangiectasia, begin to appear on the skin. These areas of redness are often painful. While the condition is considered untreatable,

At The Face and Body Place we have had success in significantly reducing the changes on the face that are psychologically debilitating to patients. Treatments to be considered are:

Enquire about this condition

Page Disclaimer:
The information and advice published or made available through the website not intended to replace the services of a physician or health care professional acting under a physician’s supervision, nor does it constitute a doctor-patient relationship. Each individual’s treatment and/or results may vary based upon the circumstances, the patient’s specific situation, as well as the health care provider’s medical judgement and only after further discussion of the patient’s specific situation, goals, risks and benefits and . Testimonials made by any person(s) on this site are not intended to substitute for this discussion or evaluation or as a guarantee as to outcomes. Examples of treatment outcomes in this website are not intended to convey any warranty, either express or implied, as to outcomes, promises or benefits from treatment. Whether to accept any treatment of a patient should be assessed by the patient as to the risks and benefits of such procedures and only after consultation with a health care professional.